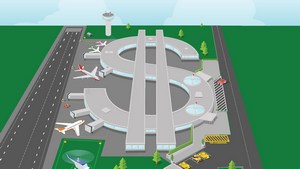 To provide informational content, we offer a recently written Travel Weekly article that provides additional intel about the rationale behind airline pricing, as well as validates our previous blog, “The Why’s and How’s of Airline Pricing”.

An interesting fact that was pointed out in Travel Weekly’s article is that of the top 30 U.S. airline markets, St. Louis ranked 30th. Dead last, with 683,530 travelers in the first quarter of this year. However, our average ticket price (ATP) was ranked as the 11th lowest in those markets at $368. Thank you Southwest Airlines (who posted a 52% share in the first quarter). In retrospect, St. Louis ranked the 12th largest U.S. air market in 2001.

While the prices of plane tickets clearly vary widely from route to route within any individual airport, the Bureau of Transportation Statistics (BTS) data shows that some airports, as a general rule, are significantly less costly for passengers than others. And more interestingly, those differences play out even among airports from within the same market (such as New York or Chicago) or that serve similar-size communities, with similar numbers of travelers, in the same general geographic regions (like Los Angeles or Washington DC).

Without fail, airline industry analysts said that the primary driver of ticket prices is COMPETITION. In general, airports that are served by many airlines, especially those in which two or more carriers serve a substantial percentage of city pairs, offer better fares than those in which competition is scant. Passengers at airports with lots of service from low-cost carriers (LCCs) and ultralow-cost carriers (ULCCs) also win out.