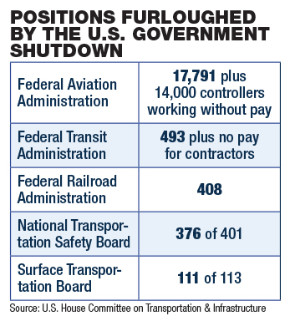 As the U.S. government shutdown turns three weeks old, the odds of lasting effects on the travel community—disrupted trips or, even worse, security risks—are increasing.

The first two weeks of the shutdown resulted in more of a "hassle" for travelers than anything else, with lines reported longer at some security checkpoints. If the shutdown persists for a few more weeks, however, there is "an increasing threat to the system", as Transportation Security Administration (TSA) personnel, air traffic controllers, inspectors and other critical members of the aviation industry don't receive paychecks.

Late last week TSA reported that most employees are showing up for work. The 5.1 percent unscheduled-absence rate is a bit more when compared to 3.3 percent a year earlier, but not nearly as dire as some media outlets have reported.

“Air traffic control, understaffed before the shutdown began, soon could reach the point at which the government will need to reduce flight volumes, which will force carriers to cancel some flights”, states Bruce McIndoe, founder and president of global travel risk management firm World.” An extended shutdown could lead to entire airports being shut down, with only a "subset of the airports" running”.